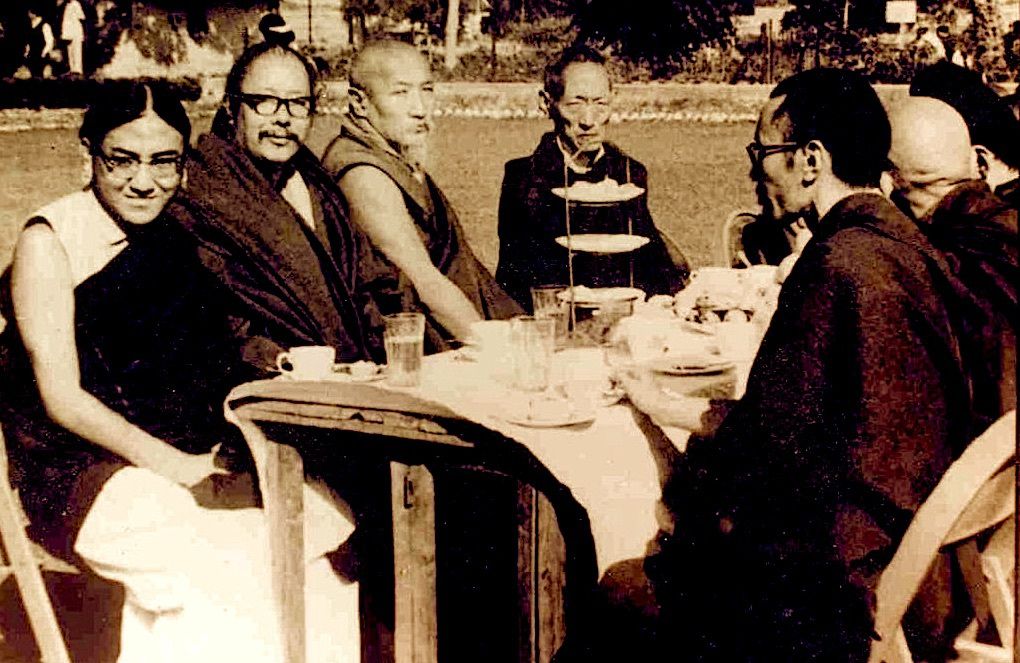 There are many things I remember about Chhimed Rigdzin Rinpoche, without necessarily being able to place them in a chronology - let’s say, logia from C. R. Lama, often at least as tasty in form as in content, notably because of his very peculiar English.

In short, like many Tibetans, especially among the few who spoke English in that generation, he spoke it in a very strange way, with many Tibetanisms; in his case, it is even almost all the grammar of his English that was Tibetan.

Here are some examples of typical sentences:

“You to me what say? I your nonsense not understanding!”

“I your politics not doing.”

(I am not here to manage what is your own business, so as to say).

More amusing in content, though less Tibetan in syntax:

“I not trusting women and snakes.”

This strange language obviously caused a lot of mistranslations. I remember one day in Paris, when Chhimed Rigdzin Rinpoche took it upon himself to defend the thesis of... spontaneous generation. In support of his idea, he gave the following argument: that once, he had closed water bottles tightly and that after a while, “six-feet animals” had spontaneously appeared. The translator, although used to him, but probably disconcerted by the extreme strangeness of the words (he is a doctor...) translated (in French, in which we use the metric system) : “Animals measuring 1 meter and 80 centimeters.” This made it even more tasty in the burlesque genre, of course.

His way of taking people to task was made even more violent by this “loose” language, which sometimes felt like a bucket of mud in the face. To a young man who was meeting him for the first time, in a retreat where a long ritual practice had to be chanted and who did not have the text, he once asked where his text for the practice was, and as the latter had answered with an evasive gesture, he said something like:

It must be said that C. R. Lama’s normal form of teaching was more or less like this: he would have people chant endless rituals taken mainly from the revelations of Terchen Nüden Dorje of Khordong (more rarely from the “Northern Treasures”); and then he would suddenly interrupt the recitation, either to take someone to task or, more often, to ask a question, especially about the meaning of the text being recited.

A word must be said about these “sadhanas” texts which Chhimed Rigdzin Rinpoche made the main practice of his disciples.

No other lama I have ever followed or translated had such long and complicated texts recited. The practice books were huge, because the lama had the text edited in Tibetan script, with phonetics on the bottom line, and then, which is more rare in the “Dharma centers,” word-for-word translation, and then a translation of the complete sentences and sometimes a recapitulation of each paragraph. To be exact, the quality of these translations was often, technically, somehow poor; but since they were practically dictated by C. R. Rinpoche, it was impossible to suggest that anything should be changed without being thoroughly brainwashed.

In recent years, for some reasons, I made the silly decision to get rid of some of these bunches of photocopies. Somehow it’s a pity: they had great qualities, especially in that I’ve never seen anything like them in practice texts for Westerners, in terms of presenting Tibetan rituals in their complete form. Chhimed Rigdzin Rinpoche’s disciples were also taught how to handle the ritual instruments, vajra, bell, damaru, etc. However, Rinpoche did not explain much about the meaning of these rituals.

Strangely enough, some of the texts I had disposed of came back to me later, but that is another story. Not those from other lamas, but exclusively those from him, as well as ritual objects connected to him, which I had sold and which… came back.

The retreats with him were therefore long days of recitations of long ritual texts, such as the “Big Rigdzin,” i.e. a ritual of Padmasambhava with eight forms, or the “Big Drolö”, practice of Dorje Drolö, a whathful form of Padmasambhava. This was disconcerting compared to the practices of other lamas, whose “retreats” are mainly an opportunity to give teachings. Basically, Chhimed Rigdzin explained practically nothing, or just accidentally; one had to enter with docility into a device that was generally “without phrases.”

For someone who was trying to understand the Tibetan Buddhist tradition as such, without confusing it with what had been done by Tibetan masters concerned with meeting Western tastes and expectations, it was fascinating. Indeed, against the modern tendency to dismiss rites as purely pompous and tedious ceremonies, Tibetan religions believe in the efficacy of ritual, both for the inner transformation of the practitioner and for acting, in some way magically, on the world. The lamas who begin by denying the liturgy in favour of either endless philosophical-moral explanations or of “meditation” (i.e., a questionable presupposition that doing a ritual is not meditating) have ipso facto rejected the Tibetan tradition before they even begin to teach it.

I am not saying that adapting the teaching to the target audience is not an eminently reasonable and natural thing to do. But after a certain point, one has to admit that one has completely turned one’s back on the principles one claims he or she want to transmit and has embraced the prejudices of those one is pretending to teach.

Chhimed Rigdzin Rinpoche could be very ironic about the Tibetan traditional way of thinking: for example, I once heard him make fun of Tibetan offensive magic rituals because of their uselessness when the Chinese armies arrived. He was also very curious, infinitely more than most other Tibetans, about other cultures (he spoke at least Hindi and Nepali, I don’t know if his grammar was more correct when he spoke in these languages than in English, but at least all this granted him access to many cultural worlds ignored - and despised - by his peers).

In this way of teachings through rituals, as in his own form of “crazy wisdom,” everything happened as if, precisely, efficiency (in a quasi-magical sense) took precedence over the understanding of meaning (though, I had many opportunities to check it by myself, he was really a great scholar). In short, to become the disciple of such a master meant: to enter a sphere of actions that one underwent without you really understanding what it was all about. Perhaps a bit like in psychoanalysis, where the unconscious emerges and begins to produce effects, without ever, despite efforts to bring the unconscious material to consciousness, achieving full transparency. With Chhimed Rigdzin, there was not so much a blind submission to a tyrannical authority, as a form of docility that implied entering into a process whose meaning was not mastered any more than its modus operandi.

The laughers will undoubtedly say that it was necessary to be insane to put one’s steps in the traces of an old man in apparently so outlandish. But it is, at least for me, that beside the radiance, the astonishing charisma of this man (in short: he gave the impression of a kind of enormous power, as one imagines one would have the feeling in front of a nuclear reactor, or again, as when one contemplates a powerful wild animal, even in a zoo - with, moreover, a kind of dimension of disturbing strangeness, a moral ambiguity, the impression of a being belonging a little to another dimension, even if on the other hand he had very familiar and down-to-earth sides, without any clerical staging, when one was with him as I was able to do when I spent whole days acting as his interpreter, when I was a university student), there were also (at least for me) some kind of indirect traces of incomprehensible action. A psychoanalyst would perhaps speak of transference; for me, the thing was strange, because my conscious commitment, my voluntary fidelity, went rather to another Tibetan master, Nyoshül Khen Rinpoche, about whom I think to write later some memories also. But while I nearly never dreamed about Nyoshül Khenpo, Chhimed Rigdzin Rinpoche, as soon as I met him, constantly, so as to say, imposed himself in my dreams (and not only in mine, also in those of people who barely ever met him, including the abbot of a Bön monastery, who never met him while he was alive, that told me he saw him in a dream and only recognized him later on, when he saw a picture!).

Another thing, which I hardly dare to mention because of the intellectual and moral discredit that his statement in its own words could bring upon me (but, in the end, what does it matter? One must state the facts; one is not obliged to draw conclusions from them when, in all good faith, one does not understand them): Chhimed Rigdzin Rinpoche made many predictions to me about things he could not know; many of them came true even though they were not probable. Some of them are still waiting; I will devote a small chapter especially to these prophecies, trying also to remember those he said his own master, Tülku Tsurlo, had made to him.